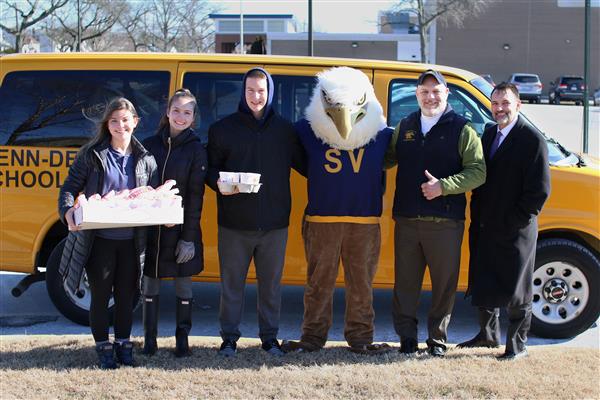 Temperatures were in single digits January 31, and the Penn-Delco community members on social media were concerned.  Many of the local crossing guards are senior citizens who work daily to keep district students safe -- in every kind of weather.  So, the Penn-Delco administration team decided to extend that concern and show gratitude for all the township employees who manned their posts in brutal weather.

That is how the Penn-Delco Cocoa Brigade was born at 8:30 am on the coldest day of the year.  A team of administrators, students, and employees whipped into action to reach the 23 crossing areas in the Aston, Brookhaven, and Parkside areas by days end.

After securing the district van and some warm cocoa and sweet treats, the team tapped Sun Valley Principal Pat Sasse and Athletic Director Pat Rafferty to round-up three representatives from student government and the official Sun Valley Griffin mascot to ride along.  While a team in the administration office filled bags with donut holes and candy (Lori Schappelle and Marti Owens), a map was made to reach the crossing guards in 90 minutes or less.  It was the least they could do on the coldest day in years.

“I was excited to help honor the crossing guards,” said Schappelle. “They do such a great job keeping our children safe getting to and from school.  As I drive to work every day, there is one crossing guard I pass, and he waves with a smile on his face. He always makes my day brighter.”

With news vans from 6abc and Fox29 trailing behind, the team made its first stop at Concord and Pancoast, startling crossing guards Beverly Wilson and Joseph Aloi who were bundled from head to toe.

“We were both loaded up with hand warmers,” remembered Wilson.   “We had them in our shoes and in our hands.  We had so many layers on, we were like the kid in A Christmas Story,” she laughed.

Aside from the single-digit degree weather, it seemed like any other day with their charges. “You can be that first smile in the morning at the end of the day,” explained Wilson.  “We ask them what did they learn. We make sure that our interaction with the kids is always a positive one.”

As the district van pulled up, they actually thought they were about to witness something worth capturing on their phones.  “We thought something clandestine was going on,” said Wilson, “then the Griffin jumped out and we realized we were the clandestine thing!”

While the Griffin offered hugs, Dr. Steinhoff and the brigade shared a thank you note, warm cocoa, and tasty treats.  It was an unexpected surprise for the team who normally is concerned more for their student crossers than themselves.

“We are charged with the kids’ safety,” said Aloi. “And that’s first and foremost. They tell us if they are having a good day or a bad day. We listen and try and be there and give them a positive moment.”  Both Wilson and Aloi didn’t expect the moment they’d share with the Brigade.  “We are out here in the middle of this traffic and chaos,” remembered Aloi.  “It was such a nice surprise. To be acknowledged for those few seconds in a day, it was wonderful.”

While the guards were caught off-guard by the surprise, the students too were moved by the last-minute effort.   “It was a big change from being so warm and cozy in class to freezing,” said Simonds.  “I cannot even imagine how the crossing guards feel every day when the weather is so brutal.”

Simonds was struck by the experience.  “I loved interacting with the guards.  They were so grateful for the hot chocolate and treats. Many of them hugged us because they were so thankful and surprised!”

Ellis agreed. “They were very appreciative. It felt good to surprise them with a special gesture.  They were not expecting us to do something like this, and it was nice to see the crossing guards so happy over something so little. “ 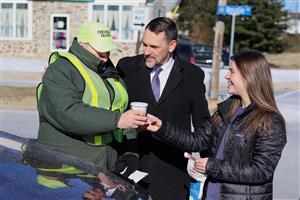 Dr. George Steinhoff, Superintendent of Penn-Delco schools, is always grateful for how teams supporting the district rise to the occasion in every type of weather.  “Although the hot chocolate delivery is a simple and humble act of kindness for our crossing guards,” he said, “we hope it sends a big message of appreciation and thanks for their work to keep our kids safe in some incredibly cold conditions. Day in and day out they are there for one reason – to keep students safe. Our community admires their dedication and commitment.”

While small, Simonds believes that little act of kindness in the bitter wind and cold is one that will be long remembered by the brigade team and their unsuspecting recipients.  “Their big smiles when they saw us walking towards them with hot chocolate was priceless.  It made me happy to see how one little act of kindness changed their whole day.”

And maybe even more.  Wilson noted that the act of kindness had reverberations that went beyond their experience on that cold winter afternoon.  “They should know that it was not a story that just ended on the corner,” she explained.  “Joe went home and told his wife, and I went home and told my family. Everyone shared that experience.  It was something that really went beyond that moment.   And there will be a time when we may have a moment where we do something for someone else.  And remember.”