Sun Valley: The musical Pippin delivers a challenge for its cast 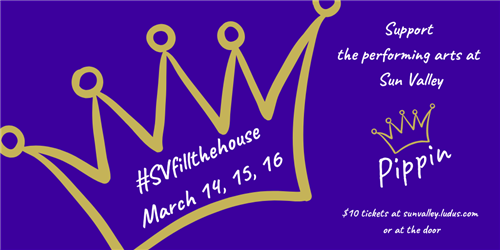 The fifth production for  Sun Valley High School Theater, under direction of Elizabeth Hazlett, is the classic musical Pippin.  It is a beast of a show that is recognized as one of the most staged. It has been performed for nearly 50 years includig two National Tours, a Broadway revival, in the West End in London, and on countless high school stages around the country.  Ben Vereen and Patina Miller   won Tony Awards for their portrayals of the Leading Player in the original Broadway production and the 2013 revival.

The Sun Valley Theater group, who has earned ten Greater Philadelphia Cappie Award nominations in the last four years, are ready for a new challenge.  Hazlett believes her cast is primed to tackle this meaty classic. “Last year, we graduated an abnormally large group of seniors from our theater program,” she explains. “They left big shoes to fill artistically, as well as from a leadership perspective. This cast has exceeded my expectations as far as taking ownership of this show and our program.”

But who is Pippin and what is this musical about?   “This show delves more deeply, more than any show we have done, into the personal journey of growing up,” explains Hazlett. “The nature of the storytelling is more abstract and you have to do a little more digging to get to the heart of its meaning.”  This timeless tale is actually a show within a show, filled with spectacle, dance, and magic tricks told by a group of fictional actors in a theatrical caravan led by the Leading Player, a role brought to exuberant life by senior Hanna Buerklin (Gingy in last year’s Shrek).

Protagonist Pippin and his father Charlemagne  are characters derived from two real-life individuals of the early Middle Ages, though the plot is fictional. Heir to the Frankish throne, the young prince Pippin is in search of the secret to true happiness and fulfillment. He seeks it in the glories of the battlefield, the temptations of the flesh, and in the intrigues of political power.

Originally directed and choreographed by the legendary Bob Fosse, Pippin features an infectiously unforgettable score from four-time Grammy winner, three-time Oscar winner and musical theatre giant, Stephen Schwartz.  Songs like “Magic to Do”, “Morning Glow” and “Corner of the Sky” will be familiar and resonate for many.   From colorful and elaborate sets, to glittering costumes, to complicated feats of dance and choreography, this production requires a new approach by the theater group.

“There is truly so much music and choreography to cover in this show,” explains Hazlett.  “It’s been a big ask as far as content is concerned. This was truly a show where we needed to put our money where our mouth was. The cast has risen to this challenge and more—they’ve worked extremely hard.”

Pippin’s journey toward purpose, however, gives the show relevance.  Senior Zack Volturo (Donkey from last year’s Shrek) tackles this complicated role and believes that his classmates will relate to his story.  “So many people my age (including myself) are going through the same journey. We are all trying to find our purpose in life. I hope the show gives some insight into finding fulfillment, big or small.”

Hazlett agrees.  “Good, believable story-telling is rooted in showing all of life’s colors—light and dark,” she says. “Pippin’s journey is an allegory for the journey we all go through in life.  High school students are living this journey in so many ways, and I can’t think of a show that asks more relevant questions of our youth.”

Working outside the comfort zone

Pippin is a character that requires depth of feeling.  And Volturo has found the experience to be most challenging.   “Playing a lead role in this musical differs immensely from my other instrumental and choral accomplishments,” he explains. “Immersing myself ‘in the world of Pippin’ takes much more emotional effort and sets a whole new playing field than what I am normally used to.  But there are many parallels such as rigorous work on technique and consistent practice. I love to step out of my comfort zone.” 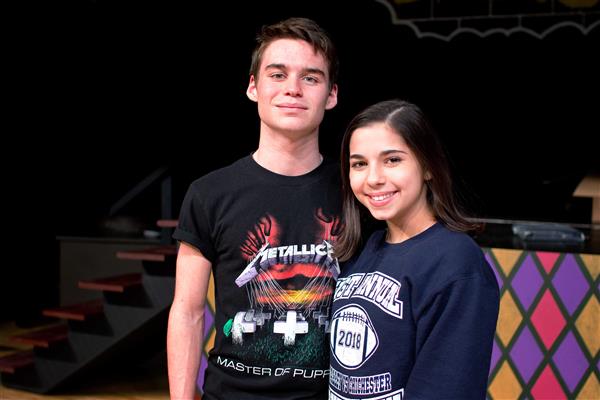 Buerklin too is feeling the challenge of her first lead role in a musical. “Being the Leading Player is a such a difficult role to take on. I am so used to playing whimsical, fun, happy characters -- so having to channel a more serious role is challenging.”  She, too, is thrilled to narrate a worthwhile message.  “This show is all about finding fulfillment in life and finding who you really are. I feel like everyone can relate to this show in some way.”

Penn-Delco audiences may have gotten used to some lighter fare, yet Hazlett and her team wanted to deliver a more complicated production.  While Pippin is a colorful theatrical spectacle filled with magic and music, there are many dark themes to the piece that are staged thoughtfully. War, lust, assassination, power, leadership, and love are all topics explored by the high school cast.  Hazlett believes the heavier subject matter will make them better actors and people.  “Dark moments are a part of life,” she says.

Many students have traveled through a theater program that runs from the 6th to 12thgrade.   They appreciate the value of stretching their talents and offering a more complicated production thematically.  “I have learned so much during my time with the Sun Valley Theater,”  Volturo explains.  “My experience has taught me what it means to not only perform, but perform with excellence. I have been able to apply those skills in the other areas of the performing arts and life, too.”

In the end, Pippin finds that happiness lies not in extraordinary endeavors, but rather in the ordinary moments and people that fill our lives.  For the actors in the cast, it continues to be reinforced by the depth of the theater experience and simple joys that come with it.     “Theater has been a huge part of my life,” observes Buerklin. “I have met some of my best and closest friends because of theater. I know I will always have these people to fall back on and they will always be there for me.”

Volturo, who graduates in May, will miss being on the Sun Valley stage.  “As cliché as it may sound, musical theatre has truly given me a home over the past 4 years. The program and community have not only given me so many great friends, teachers, and mentors, but have taught me so many things about myself that I would have never scratched the surface of.”

Hazlett is proud of this cast and the opportunity to explore this material. “Life is beautiful, messy, complicated, and not always rated G,” she says. “The kids really relate to the story being told, and are thrilled to be able to hone their acting chops with material that is substantive.”

Pippin runs March 14, 15, and 16th at 7 pm with a Saturday Matinee at 2 pm.  Tickets can be purchased at the door for $10 or in advance at svhstheater.org.  There will be a FREE special performance for seniors and Penn-Delco faculty on March 13 at 6 pm.