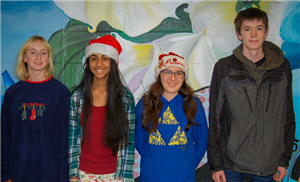 Founded in 1984, Science Olympiad is one of the premier science competitions in the nation, providing rigorous, standards-based challenges to nearly 8,000 teams in all 50 states. They host 450 tournaments annually on college campuses and hold professional development workshops that showcase innovative science, technology, engineering and math (STEM).

In grades 6-12, Science Olympiad functions much like a football or soccer team, requiring preparation, commitment, coaching and practice throughout the year. Each school-based team is allowed to bring up to 15 students who cross-train for a variety of events in their skill set, but some school clubs have more than 75 members, allowing for an apprentice and mentoring system.

"This was impressive to me," said Dobbins "because these kids were competing against a lot of juniors and seniors on other teams. They more than held their own."

While many teams competed in nearly all events, Sun Valley chose to try their hand at three: Forensics, Dynamic Planet, and Chemistry Lab.

"In the two events the kids medaled in,  eight and ten teams participated in them," noted Dobbins "so earning second place (so many) other teams that were primarily composed of juniors and seniors was a big achievement for our mostly ninth grade team."

The team, that also includes ninth grade students Xain Cabalo and Nicky McCarty, will most likely be competing in the "Wright Stuff" event (which involves flight and building a model aircraft/glider) at the next competition at Kutztown in January.

Sami Reeves, who medaled at Girls High on her birthday, was excited to add this competition to her accomplishments.

"My science classes and the interest to keep wanting to learn more about the different sciences prepared me for not just to do this competition but to do all the competitions I have done," she explained.  "Since the first day of Science Olympiad in the sixth grade I've wanted to medal."