Northley and Sun Valley: A closer look at Men Sing

Sixty-three boys and young men from 6th through 12th grade participated in the second annual “Men Sing” at Sun Valley High School on January 4.  Led by chorus teachers Liz Hazlett and Nicole Moyer, the unique event brought boys from the middle school choir to the high school for a day of accelerated practice with their more experienced peers.

Nicole Moyer at Sun Valley High School would like to see that change.  “Liz and I thought if we could get the young men together and have them make connections with each other, we could increase interest and retention.”

“We do a lot of collaborating to build continuity between levels of our program,” adds Hazlett.  “We came up with this idea as a way to show our guys how amazing it is to sing collectively with one another, how special a men’s choir sound is, and to build camaraderie across levels.”

The event began promptly at 9 am with greetings and warm ups. Chairs were positioned on the stage as participants were grouped according to section. Two musical choices were introduced: a traditional selection (Vive L'Amour) as well as a contemporary song (Thinking Out Loud) by Ed Sheeran. The day was a long one that included sectionals where groups were divided by their vocal part.  Each group rehearsed their section, sometimes together and other times separated in the auditorium and chorus room.

There were some nerves early on.  “There is always apprehension,” observed senior tenor Tommy Christaldi.  “Last year we didn’t know what to expect working with middle schoolers.  But they are at an impressionable age and we have a chance to show them that we love what we are doing and have no qualms doing it.”  Junior bass Michael DiFurio enjoyed his second year of sharing the stage with the Northley boys. “It’s beneficial for the middle schoolers to be here.  We’re showing them the ropes. It’s great when the parts start to fall together.”

Moyer was pleased to see the young men get to know each other.  “This year we allowed more students to lead sectionals so that high school men were more involved in leading the middle school boys through music.  We also planned small-group time, which encouraged them to make more connections with each other.”

Sixth grade tenor Dallas Mooney, who participated in the PMEA District 12 elementary chorus fest last year, was prepared for the rigor of the day.  “It is what I expected. But it’s been a challenge. It is hard because you are hearing so many different parts and you forget yours.”   Gabe Palmarini, also a tenor and participant of elementary chorus fest, agreed. “It has helped me to work with a giant group of kids more experienced than me.    Putting the sections together is very hard. You have to listen.  It shows in your work when you don’t listen. “

There were two short breaks and a group lunch where the young men could mingle and talk.  Many of the high school members sat chatting with their middle school counterparts, sharing pizza and their experience during a thirty-minute lunch.  While the goal has been to inspire the middle school boys, Hazlett sees the value for high schoolers as well: “It’s a great reminder of where they came from.  They were just like my middle school boys at one point. But this day allows them to be leaders and realize how far they truly have come as musicians.” 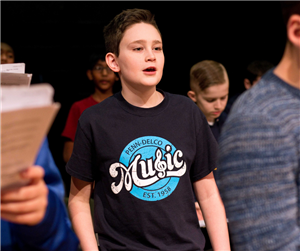 That may have contributed to the increase of young men auditioning and being selected for PMEA district and regional choirs in the last two years.   Two young men were chosen to attend districts this year with another four qualifying as runner-ups.  With a large choir at the middle school comprised of  16% males, Hazlett is committed to sending more of them into high school choir.  “It gives them a safe place where they can be themselves and make mistakes.  It gives them a place where they belong, and it helps them build interpersonal skills that are so imperative for success later in life.”

Junior tenor Billy Fisher, who was chosen to perform at districts, who has appeared in musicals, and is on the varsity basketball team, agrees.  “I grew up singing at church and playing ball.  It’s great for the guys to see what it is going to be like to be in high school.    It’s good for them to find other interests.“  Sixth grade tenor Kaiden Robinson, who enjoys sports and music too, was glad to have the experience. “I can get to do something I don’t usually do.  It’s cool to meet more friends that like sports and to sing.  I like to try new things and see if I am good at them.”

Robinson’s sentiment is at the core of Men Sing, believes Hazlett: “My guys get the opportunity to hang out and sing with boys they perceive to be “cooler” than them – and see them perform at a higher level of musicianship.  They watch them apply the skills I am trying to instill in them and experience how it pays off.”  Moyer looks forward to future efforts that might attract and retain young male singers at the high school. “I’d like to eventually put an informal after school men’s choir together for all that are interested.   It gives them a place to belong, find amazing friendships and learn about music.”

Hazlett too, sees the potential through high school and beyond: “The value of working as a team to accomplish something, to create something beautiful, is at the core of what makes choir (and music ensembles) so satisfying.  It allows them to express emotions and experience humanity in a way unique to choir."

After hours of rehearsal the group performed for a small audience, demonstrating that young men who enjoy singing can produce some wonderful results.  Robinson was satisfied with their progress.  “We put in a lot of work.  I think it gives you confidence to sing in front of more people and not be afraid,” he said.    “You don’t know until you really try.  If they (the older boys) can do it and progress and are singing like that, I can do it. “