While many seniors are deep in the process of finalizing next steps in their career preparation or college application process, Sun Valley students Tommy Christaldi and Angela Eang know where they are headed upon graduation.  Chosen among 6,507 finalists for the 2018 Quest Bridge National College Match, Christaldi and Eang are now College Match Scholarship Recipients to their dream schools. Christaldi will be headed to The University of Pennsylvania while Eang will attend Swarthmore College, both with guaranteed four-year scholarships.

Quest Bridge is a national program that connects high-achieving, low-income high school seniors with full scholarships to the nation’s top colleges.   A total of 1,044 exceptional students were ultimately admitted early to one of 40 college partners.   A big feat, considering Quest Bridge fielded 16,248 applications, the most ever, this year.   Christaldi and Eang are only the fourth and fifth students ever matched from Sun Valley.

The road to success 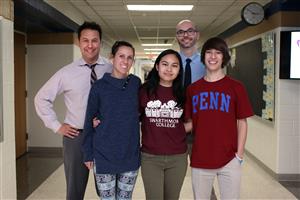 It’s a grueling process that begins in a student’s junior year, when english teacher Matthew Morris and math teacher Joseph Malaczewski meet with guidance to determine whether any students might qualify for the process.

“We take a look at the top students and achievers,” explained Morris.  “I was lucky enough to have both these students in eleven AP Language and Composition. We usually work on college prep at the end of that year.   It all tied together.”

The process is an accelerated one that requires multiple applications and essay writing.  “It’s economic and academic and in multiple phases,” said Morris.  “You have to apply first and hope to become a finalist in October. Then you find out in December if you are matched. “

Guidance counselor Erin Judge participated in this year’s match.  “There are a lot of moving parts,” she explained.  “You have to do your financial aid earlier, collect different letters of recommendation, and more if you are a finalist.”   The rewards can be great, she continued: “Quest Bridge elects to provide students with matching schools where they provide all financial support. That includes campus expenses, living expenses, transportation, books, meals, everything.”

For Christaldi and Eang, it was a difficult process, but one that they were driven to pursue.  “I personally listed eight schools,” remembered Eang.  “You apply for Quest Bridge and that application is sent to the eight schools and then they require additional input.”   She was thrilled when her first pick was the school that chose her.  “I’m really happy. Swarthmore College is a liberal arts college and my interests are computer science and art, so it is a perfect match,” she said.  Christaldi, too, cannot believe that his first choice was his final match.  “I wrote each of the other supplemental essays first and left the last for Penn,” he explained.  “But I just couldn't write the  ‘Why Penn Essay’.  I knew why I wanted to go there but I just couldn’t put into words.”  He finished the essay just before it was due. 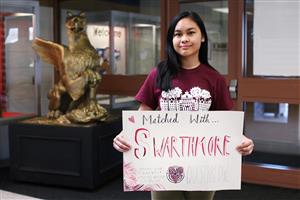 Aside from the multiple essay writing, the pace of the process was most stressful.  “You only have a week and a half to get financial information and other information to the schools after you learn you are a finalist,” said Eang.    “It was nerve wracking.  There were a lot of dates.”  That is why Christaldi was grateful for the support his Sun Valley team offered him along the way.   “I stress over everything.  I knew the deadlines.  I was second-guessing all my writing,” he said.    “Having multiple perspectives to give me feedback really helped.  It was nice to know I had people to talk to. They told me to chill out!”

Even more rewarding is the response they have been getting from their families and friends. “There is video on facebook of my mom jumping up and down,” laughed Eang.  “Yes, that happened,” added Christaldi.  “Even my sister was excited in her own special way; although she was hoping I’d get matched further away.”

Attired in their new future alma mater shirts, both students were aware of the amazing opportunity they have before them.  They are grateful for the support they have received along the way. Sun Valley Principal Patrick Sasse remarked that their success has been a team effort: “Tommy and Angela’s achievement is a direct reflection of their families and community who have supported them to this point.”  Indeed, Judge offered that this has actually been a lifetime journey for both students: “It is an incredibly competitive and complicated application process,” she said.  “While they may have started the application in the summer, it was the last 12 years of hard work and perseverance that made them candidates and ultimately scholars.”

Quest Bridge, a national nonprofit based in Palo Alto, California, connects the nation’s most exceptional, low-income youth with leading institutions of higher education and further life opportunities.  This year’s College Match Scholarship Recipients had an average unweighted GPA of 3.93. On standardized testing, the middle 50% received between 1360-1500 on the SAT and between 29-33 on the ACT. 94% are within the top 10% of their graduating class. The majority of these new Quest Bridge Scholars — 77% — are also among the first generation in their families to attend a four-year U.S. college. 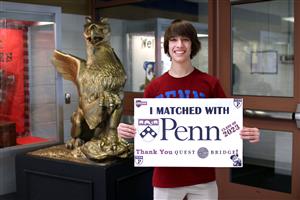 Malaczewski is proud of what these two Sun Valley students have accomplished. “It just goes to show you how elite these two students are. They are really deserving,” he said.   “I am in my 21st year teaching, and they are two of the best I’ve ever taught. To have two from the same school is really remarkable.”

Sasse is equally impressed: “We are honored and proud to have two talented students chosen for the prestigious Quest Bridge Scholarship,” he said. “This accolade is certainly a testament to the dedication and effort that Angela and Tommy have put forth.”  Sasse continued: “Sun Valley’s academic reputation is stronger for their contributions to our programs.”